The World's Largest Menorah is NOT in NYC?!?

Despite what Chabad and the City of New York may claim, it appears that the largest menorah in the world is neither the 32 foot high one to be lit in Grand Army Plaza in Brooklyn (pictured above), nor the one designed by Yaacov Agam that will be lit on Fifth Avenue (apparently also known as "Grand Army Plaza," terribly confusing to all Brooklynites, pictured to the right), beginning December 20th, 2011.  I'm shocked too.  I mean, Chabad even owns the webpage "www.largestmenorah.com."

No, as reported in the New York Times just over a year ago, the world's largest menorah is in...Indonesia!  Indonesia?  Where Judaism isn't even an officially recognized religion?  Where, during World War II, Jews were scapegoated and placed in concentration camps by the Japanese?  Where Jews were killed or forced to leave after World War II and during the 1950s? Didn't all the rest emigrate?  Aren't there only, like, 20 Jews left in all of Indonesia?  I mean, Israel and Indonesia don't even have diplomatic relations!  And yet...yes, Indonesia! 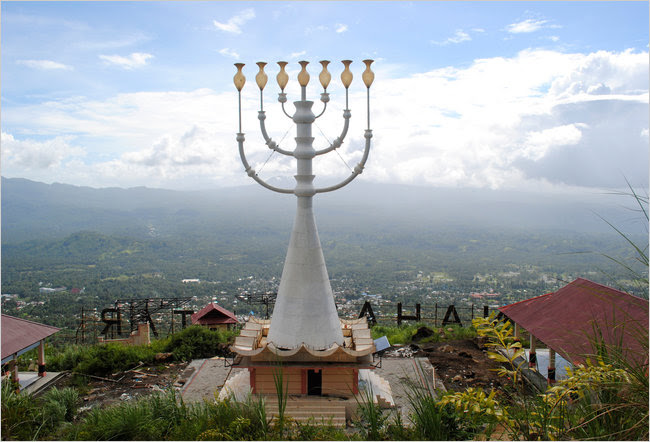 As described in a New York Times article from November, 2010, Manado, the second largest city in Sulawesi, is home not only to the fourth-tallest statue of Jesus in the world, but also to a 62 foot tall menorah.  According to the article by Norimitsu Onishi, the menorah was erected at the cost of $150,000 by the government of this largely Christian region.  The Jakarta Globe reports that the menorah was the brainchild of Denny Wowiling, a local legislator who "proposed building the menorah after learning about the one in front of Israel's Knesset," in the hopes that it would help attract European tourists and business.

For more about Manado's small Jewish community, check out this article from Jewish Times Asia (where according to the website, as I post this, it is already tomorrow - neat!), this one from "Vos Iz Neias?" (a rather bizarre site, but the article has terrific photos), or best of all, this video about Indonesia's Jewish Micro-Minority from the VJ movement.  Happy Chanukah!

How to help your daughter's teachers re-think gender

There's so much good stuff going on right now to help Jewish boys and girls grow up with a sense of self-confidence -- and one that isn't predicated on gender stereotypes. But what do you do when your child's teacher didn't grow up attending Moving Traditions programs, hasn't been to a training on the "evaded curriculum" and doesn't even realize that Jewish chicks rock?


"I wanted to share with you the email below that I wrote to my daughter's school administrators. Not in response to any incident or specific concern I had about the school, but rather in response to my ongoing fear/concern about raising strong, healthy girls with high self-esteem and confidence - and my concern about raising boys who see their full range of humanity open to them, rather than a narrow view of what 'masculine' means.

"I encourage you to use this email as a template to edit and send on to your own kids' school administrators and community group leaders (or forward to friends/siblings with kids). If we each take up this important issue, and each school does professional development around it, we could, together, have a big impact. (Obviously, if your child doesn't go to a Jewish school, then you wouldn't include the Jewish-related items. Similarly, if your kid is well past pre-school, you would put in different examples.)

"To give extra motivation - I sent this to our school, not knowing what response I would get. They took it up very seriously and appreciatively, spending 3.5 hours today on a professional development workshop for faculty and administrative leaders on the topic.

"If you're in NYC - I actually designed and facilitated the workshop! And I'd be happy to bring it to your school, also.

"Here's to building a world where both girls and boys see a broader range of possibilities!"

I never fail to notice how often someone limits my daughter's choices - at the doctor's office, when they say "Do you want princess stickers?" At the arts shop, when they say "Do you want pink paint?" I recently saw a couple of articles that made me think more about how gender is "taught" (formally/consciously and unconsciously) to children, which prompted me to write this email.

I'm hoping that school can be a place where my daughter's options are kept as open as possible - which is only possible if her teachers have an awareness of these types of things and how limiting they can be. Especially since many other children will be perpetuating gender stereotypes with their words and actions, I'm hoping that the teachers will help keep open the windows to opportunity.

These windows of opportunity are, of course, also important for the boys. There's a world and palette that our society tries to limit boys to, also.

These articles that I read not only comment on what teachers say and what they encourage, they also comment on what is included in classrooms. For example, perhaps the preschool classrooms do not need to have high heeled shoes for the kids to dress up in. As I've watched the girls having to walk gingerly around the classroom, I've wondered, "Is 3 years old really the age at which we want to impede our girls' movement in this way? We don't have shoe-dress-up for police officers or firefighters or chefs. Maybe dressing up the body but not the feet is good enough for a princess, also."

In case you're interested, I'm including the links to the articles that prompted me to write now. I'd be happy to hear your reactions. And I'd love to hear more about how the school - both in the preschools and beyond - thinks about these issues. One of the things my husband and I love most about the school is how thoughtful you all are, so I'm sure you already have a point of view! :)

And here are the articles Julie recommends, that led her to write this letter in the first place:


1. How to Talk to Little Girls, by Lisa Bloom (Huffington Post). "This piece resonated a lot with me because I've been struck how waiting in the morning for school to start, almost every parent says to each girl as she arrives, 'Hi! I love your dress/hair/shoes/coat/etc.' I've been bothered, but couldn't quite articulate it to myself. This does a great job."

2. Taking a Stand Against the Princess Culture, by Susan Tomchin (Jewish Woman Magazine). "An interview with Peggy Orenstein, author of Cinderella Ate My Daughter. This made me think about how girls are dressing up, how Talia's already asking me to wear nail polish (because she sees other girls wearing it), etc. and helped paint a broader context for all of that."

3. The film Miss Representation. "This film focuses on media and advertising - I think it's a really important film."


Do you have suggestions of other resources and must-reads? Post them in the comments.
No comments:

Well, here's a job description you've never seen before: To direct a new initiative that will attempt to replace individual synagogue schools (in Manhattan) with an elective-driven communal coalition:

"Applications are now being accepted for a Jewish educator with an ability to think outside the box to lead a cutting-edge complementary Jewish education program based in Manhattan for children in grades 3-7.

"The Jewish Journey Project (JJP) seeks to revolutionize supplementary Jewish education for children. JJP catalyzes collaborations between congregations and JCC’s to create customized learning journeys for every student based on their interests and passions. JJP’s educational design is experiential and oriented to address the whole child, applying the wisdom of the Jewish heritage to the social, emotional and intellectual growth of each and every student. Families are deeply involved in the JJP process as they help to customize their children’s learning journey in consultation with advisors who serve as the liaison between families and member institutions. Most importantly, in JJP the entire community becomes a living classroom and, as a result, a breeding ground for lifelong Jewish engagement.

"The Jewish Journey Project was launched in the winter of 2010 based a concept paper written by Rabbi Joy Levitt, the executive director of the JCC in Manhattan. Currently, six synagogues spanning the denominational spectrum and two JCCs are participating in a year-long planning process to develop this new model for elementary Jewish education. The program will launch as a consortium in the fall of 2012. The position is available commencing March 2012 with the immediate tasks being the hiring of a faculty, the marketing of a new program and working closely with our partner institutions to meet their respective needs.

"Candidates should have at least an MA in the field of Jewish education or the equivalent. They should have experience in both formal and informal Jewish educational settings. The position will require strong management skills (e.g., budgeting, putting new systems in place, communications strategy, hiring and supervising personnel, scheduling,) as well as leadership savvy (e.g. inspiring faculty, raising the bar of what is currently acceptable in the realm of Jewish education, working with funders, Jewish communal professionals, parents and their children). Previous experience in running a school would be most valued though we will consider candidates with a less conventional background.

"Interested candidates should send in a resume, a letter explaining their interest in and suitability for the position and their salary expectations to Rabbi Sid Schwarz, project director for the Jewish Journey Project at dokrent@jccmanhattan.org."

If this is the first time you're hearing of the Jewish Journey Project, you might want to read Joy Levitt's editorial or Julie Weiner's article in Jewish Week.

We at Emanu-El have been involved in the planning process for over a year, so feel free to be in touch with me directly if you are curious about this initiative or my thoughts on the position.
No comments: