Should Religious School be Cancelled on Halloween? 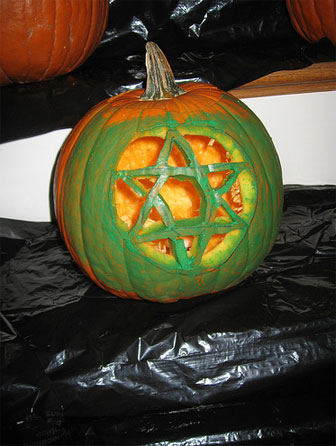 This year October 31st, a/k/a Halloween, falls on a Monday.

This poses a unique challenge for religious schools. Unlike Thanksgiving or New Year's Day, Halloween is not a national holiday, and secular schools do not close. Yet, practically speaking, for many children in the United States, the afternoon of the 31st is meant for trick-or-treating - exactly the time-slot when religious school is in session. And when I say "many," I think back to the last time that Halloween fell on a day when our school was in session.  Out of 75 students, exactly six showed up. One kid brought his mom, and I overheard him telling her, "You see, I TOLD you I would be the only fifth grader here!"

So this leaves religious school principals in a complicated position. On the one hand, it is hard to rationalize closing school for a non-Jewish holiday (I'll say here, parenthetically, that although some Jewish schools and teshuvot take a strong stance against Jews participating in any non-Jewish celebrations, I find unconvincing the arguments that Halloween is a "Christian" or "pagan" celebration.  True, it has pagan roots, but so do many Jewish holidays and rituals.  There are indeed Celtic neopagans celebrating Samhain on October 31, but that's not really the issue here.  And, we aren't talking about cancelling school on November 1, "All Saint's Day," but on "All Hallow's Eve," the night before; Halloween can be confusing and problematic for Christians too).

On the other hand, how do we ignore the reality that many of the kids will skip school, and that this will impact the experience of the ones who do attend?  Do we take a public stance on whether or not it is okay for kids who do attend - and faculty - to come in costume?

So what to do?  I know of several schools that close for the day and instead run an in-service for their faculty.  This is a sensible response, and consistent with how some schools handle other holidays, such as Veteran's Day or Martin Luther King, Jr. Day.

Other schools allow for, or even informally encourage, early dismissal - a sort of compromise approach.

Still others offer special programming on the day, meant to entice students to view school as both a worthwhile alternative to trick-or-treating and to feel rewarded for their attendance.  One school I know offered a program on demons, ghosts and witchcraft in Judaism; another ran "Purim in October."

We are in the fortunate position at Congregation Emanu-El of running a one-day a week school that offers classes on Sundays as well as weekday afternoons. We have a general policy of encouraging students who are unable to attend on their usual day of school to attend on the other day.  In fact, we've had students who regularly alternate between Sunday and weekday attendance, including children of divorced parents who have alternate custody over weekends and kids who change their day of school with the change in sports seasons. This year, we will suggest that parents whose children might miss school on the 31st should send their children on the 30th instead.  I'll let you know in the comments section how this goes.

This is, of course, just the first year in a new cycle of dealing with the "October Dilemma."  In 2012 and 2013, when Halloween falls on a Wednesday and Thursday, it will conflict with the schedules of many religious schools.  Then, in 2014, we'll turn this problem over to the clergy; they'll have to figure out how to handle attendance at All Hallow's Eve of Shabbat.
5 comments:

In the fall of 2009, Congregation Emanu-El of the City of New York was named one of 24 “innovating congregations” in the New York area because of our dedication to educational transformation. We became a founding member of LOMED (Hebrew for “learning”), a coalition of diverse institutions from New York City, Long Island and Westchester, all committed to developing educational programs that are relevant, engaging and inspirational.

During the past academic year, LOMED provided the resources for us to create a four-minute video about our seventh grade Mitzvah Corps. (View it at www.youtube.com/emanuelnyc.) LOMED also awarded us a grant supporting professional development for our faculty and experimentation with new approaches to learning. We’ve put this funding to good use: After its pilot year, our eighth grade Lirdof Tzedek (“Seeking Justice”) program was identified as a “highly effective model” recommended for replication by other synagogues.

Most important, our work with LOMED has provided a framework to think deeply about the ultimate aims of our school. What is it we hope our children and their families will gain from the Religious School experience? How will it influence our community, both now and in the future? Through LOMED, we defined the purpose of Jewish education at Emanu-El: To support our families in living Jewish values.

Living Jewish values means much more than remembering stories from the Bible or being able to say a prayer in Hebrew. There are far too many examples of people who are knowledgeable and perhaps even religiously observant but who somehow fail to live ethically. For our students, studying a Bible story involves investigating the dilemmas faced by our ancestors and exploring their actions, the virtuous and the shameful, the praiseworthy and the irresponsible. We ask how the decisions they made might serve as examples in our striving to be wise, just and compassionate individuals. 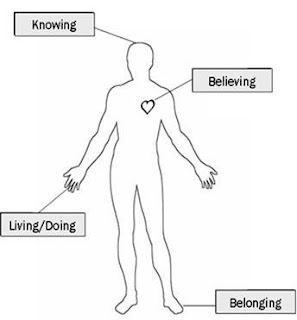 Many ways exist for educators to talk about what we do, and as in any profession, much of it is insider jargon. LOMED provides a language with which we can articulate the goals of the school curriculum clearly and simply. Using the diagram that accompanies this article as a guide, our teachers collaborate to shape meaningful and vital learning experiences.

This diagram is a clever mnemonic device that highlights four dimensions of effective instruction. First, every lesson must engage and inspire the mind of the learner (the “head”). Second, the “hand” is a reminder that every learning experience must both incorporate and lead to action—perhaps a change in behavior or the development of a new skill. Third, we must consider the “hearts” of our learners, for in everything we teach we must ask, “Why should we care?” And finally, the “feet” remind us that effective Jewish education leads us to take a stand on our beliefs as a part of a community.

This “whole person” approach ensures that our Religious School program is responsive to the genuine questions of our learners, that the learning is applicable to daily life, and that our school community is one in which our children will grow into responsible and capable Jewish adults. Each classroom is a laboratory for Jewish living in which the teachers model the thoughtfulness and mutual respect that we seek to promote in our students. The care and concern our teachers have for each child enables our students to support one another and to challenge themselves to grow as individuals, as family members and as part of an ethical Jewish community.

We are fortunate to be the inheritors of ancient wisdom that guides us in living principled lives in complicated times. At Emanu-El, our students become reflective about their actions, passionate about their beliefs and kindhearted toward one another. As we strive to become the best people we can be, proud of our heritage while accepting no dogma blindly, we are prepared to join together with those of all faiths and backgrounds to build a just and virtuous society.